This is an archive page for the mission activities of the Diocese of Georgia in the Dominican Republic during 2012.

3. Representation at the DR Diocesan Convention based in El Pedregal, DDG meeting and exploration trip based in Santo Domingo, (Diocesan team; February 8-21)

For more detailed information, please check out the Companion Diocese webpage here. You will find a wealth of information about mission opportunities, travel diaries, and photographs of most of the events mentioned above. For more information, contact the Rev. Tar Drazdowski, Chair of the Companion Diocese Commission and Assistant Rector, Christ Episcopal Church, Valdosta Georgia; or the Rev. Canon Frank Logue, Canon to the Ordinary, Diocese of Georgia. 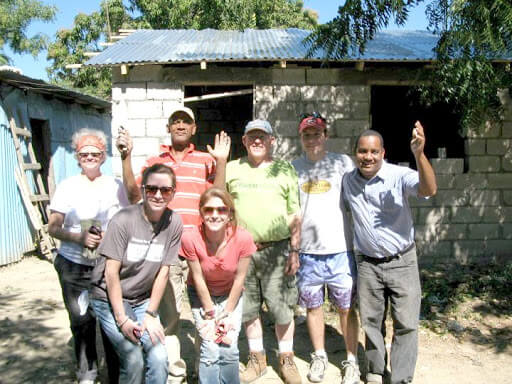 The members of the mission team from St. Patrick’s, Albany, with the local construction chief and Fr. Jesús Mosquea in Azua, January 2012.

The Diocese of Georgia conducted a mission trip to Azua during January 15-20, 2012. This mission trip was organized by St. Patrick’s Episcopal Church in Albany, GA, and led by St. Patrick’s rector, The Rev. Jay Weldon. Five people from St. Patrick’s, including Fr. Weldon, participated in this trip. The team flew from Atlanta to Santo Domingo on January 15th and stayed overnight in a hotel in Santo Domingo. While in the city, they met with The Rt. Rev. Julio C. Holguín, Bishop of the Diocese of the Dominican Republic. After traveling in a rented vehicle to Azua, they stayed in the Hotel San Ramon and ate most meals in the home of the local priest, Padre Jesús Mosquea. Padre Mosquea is the vicar in charge of three congregations in the Azua area: San Jorge, Espíritu Santo, and La Reconciliación. The team’s meals were prepared by two local parishioners.

On January 20th the team drove from Azua to Las Américas International Airport east of Santo Domingo and flew back to Atlanta. 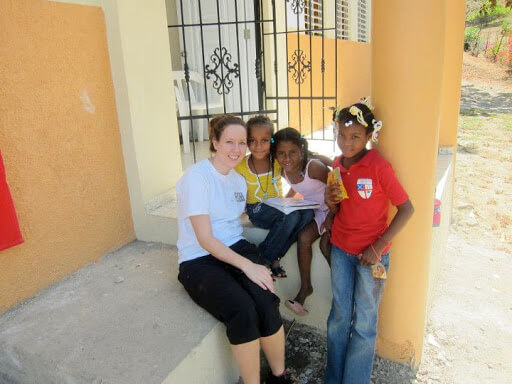 Team member Kate Pontello with local children on the steps of the unfinished high school in El Carreton, January 2012.

The Diocese of Georgia conducted a mission trip to El Carreton during January 23-30, 2012. This mission trip was organized by The Southeastern Convocation and was led by the Very Rev. Ted Clarkson, rector of St. Andrew’s, Darien, and St. Cyrian’s, Darien. Sixteen persons, including Fr. Clarkson, participated in this trip. The team flew from Orlando to Santo Domingo on January 23rd and stayed in the Hotel Caribani in Bani, a small city near El Carreton. They ate their breakfast and supper meals in the restaurant of this hotel, and their lunch meals were provided by local residents at their work site.

The team’s primary activities included working on an unfinished high school building (painting, wiring, and installing a rooftop solar hot water heater) along with crafts and play activities with the local children.

On January 29th the team drove from El Carreton to Santo Domingo and stayed overnight in the Hotel Mercure prior to their flight back to Orlando on January 30th.

For more information on this mission trip, contact The Very Rev. Ted Clarkson.

Representation at the DR Diocesan Convention based in El Pedregal, DDG meeting and exploration trip based in Santo Domingo, (Diocesan team; February 8-21) 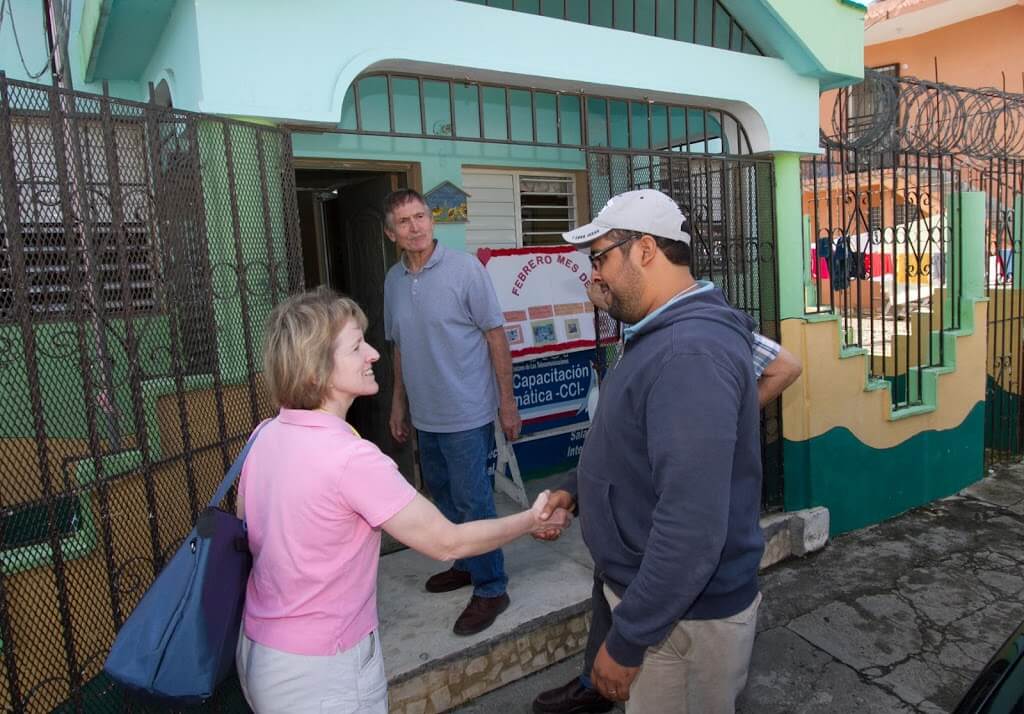 The Rev. Joan Kilian is greeted by Padre Hipólito Fernández Reyna at the entrance to El Buen Samaritano, a day care center in San Francisco de Marcorís. Mission team member Fred Richter is in the background of this photograph.

Bonao – San Juan Bautista (church and education center, along with a fire station)

The team had a productive meeting with The Rt. Rev. Julio C. Holguín, Bishop of the Diocese of the Dominican Republic, and senior members of his clergy to learn about his priorities for integrating the work of mission teams in the development of the Dominican church. The team members were also greatly assisted by The Rev. Deacon Bob Snow and Ellen Snow, two missionaries who work on Bishop Holguín’s staff to coordinate the work of mission teams in the Dominican Republic, and by Patricio (Rafelito) Encarnación, the diocesan driver and mechanic who drove the diocesan van.

The Rev. Tar Drazdowski and Fred Richter wrote this statement to summarize this trip:

“The February 2012 Exploration Trip to the Dominican Republic was memorable for several reasons, among them the opportunity to visit sites in Azua and El Carreton where mission teams from the Diocese of Georgia had been working only a month earlier; for the overnight trip to Barahona in the southwestern corner of the Dominican Republic, where none of us had ever visited before; and for the invitation to help the clergy and staff of La Epifania, the Dominican Episcopal cathedral, to distribute a free breakfast meal and staple food supplies to the needy residents of the neighborhood. We looked at many potential mission sites to gather information on work projects and logistical support to share with congregations planning future mission trips, and two that would represent new sites for work by Georgia teams attracted our particular attention: the day care center and unfinished church in San Francisco de Macorís, and the church and school in Santana. As a result of this trip, Trinity Episcopal Church in Statesboro is currently planning a mission trip to San Francisco de Macorís in June, 2012, a location that would represent the fifth mission work site for the Diocese of Georgia in the Dominican Republic. We were deeply moved by the enthusiasm of our Dominican friends for international partnerships, and we hope to convey this enthusiasm to the congregations of the Diocese of Georgia through the future work of the Companion Diocese Commission.” 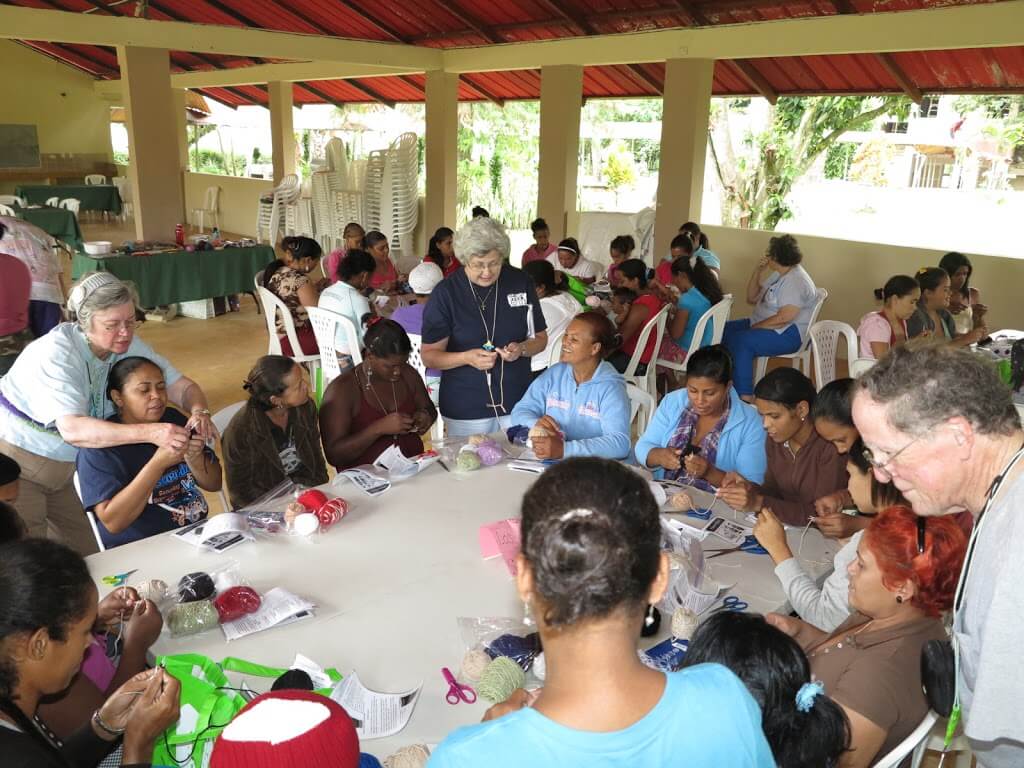 The June 2012 mission team sponsored by Christ Church (Valdosta) conducted knitting classes for over 60 women in the village of El Pedregal.

This mission trip report, along with the associated trip journal and photographs, is available at the Christ Church (Valdosta) web site. 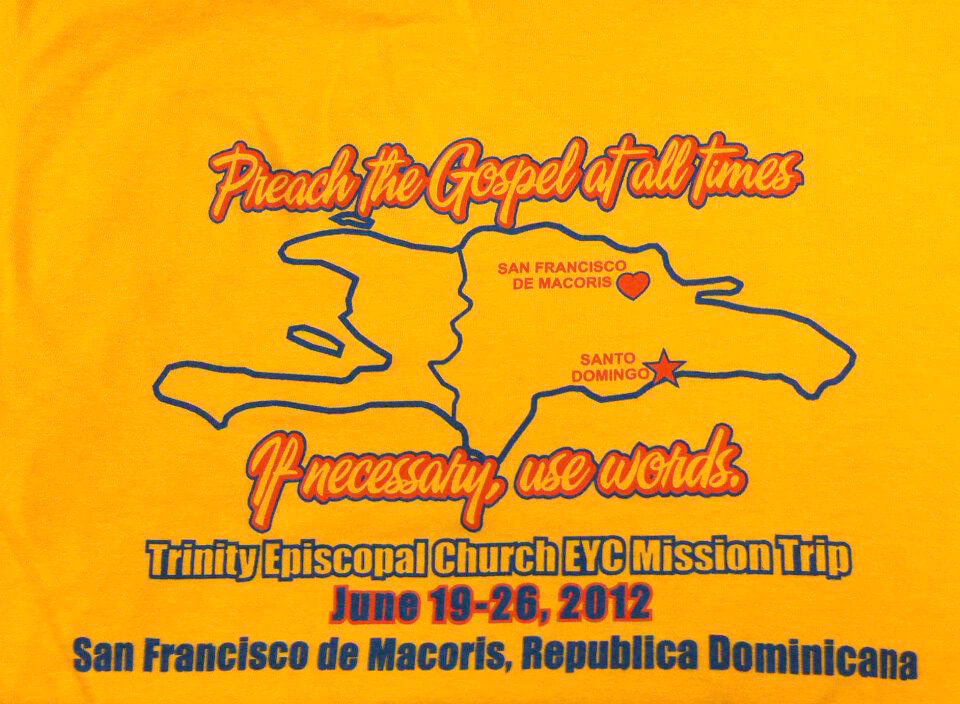 The design on the t-shirt worn by mission team members in San Francisco de Macorís in June 2012.

The Diocese of Georgia conducted a mission trip to San Francisco de Macorís during June 19-26, 2012. This twelve-member mission trip was organized by Trinity Episcopal Church in Statesboro and was led by the Rev. Joan Kilian and Dr. Fred Richter. Most of the team members were from Trinity’s EYC group. While in San Francisco de Macorís, they stayed in the church buildings of Jesús Nazareno and worked at the El Buen Samaritano day care center. Their work was supervised by Padre Hipólito Fernández Reyna, vicar of Jesús Nazareno. Their meals were provided by the staff of the church and by Padre Hipólito’s family. Their primary task at the day care center was to sand and make ready for use the pews for a new worship space and social welfare building under construction at that facility.

At the conclusion of their work in San Francisco de Macorís, Padre Hipólito sent this email message to Trinity (Statesboro): “HI! Blessings to all!! This has been a great visit, a wonderful group!! Everything was just fine and they did a great job. They’re now in Santo Domingo. Blessings.”

An online album of photographs from this mission trip is available on Trinity’s Facebook page here.

For more information on this mission trip, contact the Rev. Joan Kilian or Dr. Fred Richter at Trinity Episcopal Church in Statesboro. 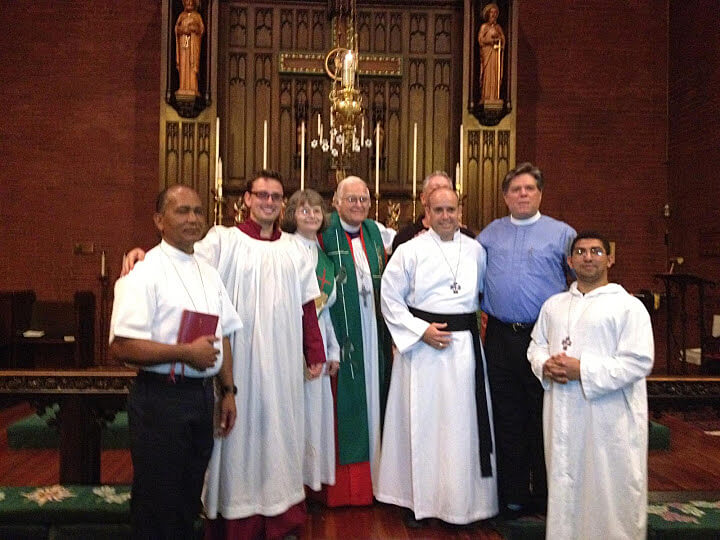 The Rt. Rev. William Skilton (center) with other participants in this preaching mission at St. Paul’s.

For the last three years, St. Paul’s Episcopal Church in Savannah has worked at building a ministry with the Hispanic/Latino Community in Savannah. In order to increase their efforts in mission and evangelism with the Hispanic/Latino Community in Savannah and the surrounding areas, St. Paul’s hosted a Preaching Mission during the week of July 22 – July 27, 2012. The Preaching Mission was called “Encounter with Christ 2012: Go and make disciples.” Each evening the services focused on one part of the Baptismal promises as they explored how to live into the call of Jesus to “Go and make disciples.”

For more information on this preaching mission, contact the Rev. Charles Todd at St. Paul’s. 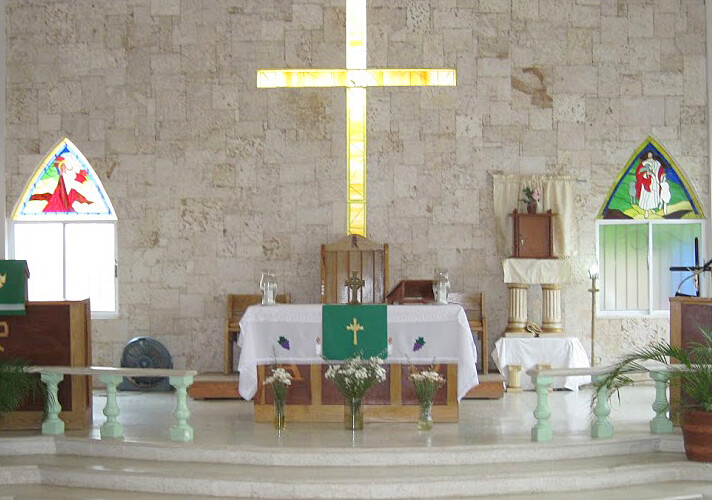 The interior of an Episcopal church in Santiago, a large city in the north of the Dominican Republic.

During October 22-26, 2012, the Rev. Joshua Varner conducted an exploration trip in the Dominican Republic to scout potential locations for a diocesan youth mission trip in the summer of 2013. Despite Hurricane Sandy’s presence on the island, he was able to visit sites in the capital, Santo Domingo, as well as sites east, west, and north of the city, including both work sites and possible places to stay in each area.

This week-long mission experience for 9-12 grade students in the Diocese of Georgia is scheduled to take place from June 24 – July 1, 2013. For more information about this youth mission trip, contact the Rev. Joshua Varner at St. Patrick’s Episcopal Church in Pooler, GA. 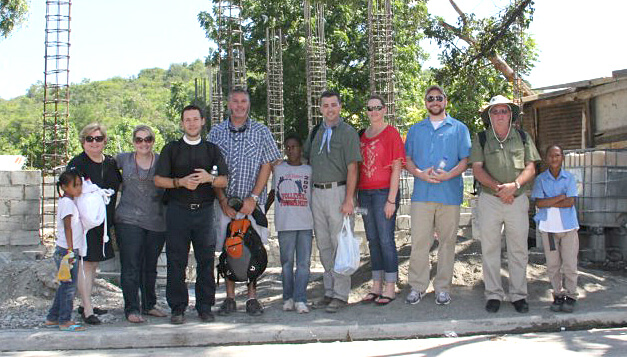 The members of the mission team from St. Anne’s Tifton and St. Patrick’s Albany in Las Carreras.

From October 27 until November 2, 2012, five members of St. Anne’s Tifton teamed up with three members of St. Patrick’s Albany for a mission trip to Las Carreras, a small community near the large city of Azua on the southern coast of the Dominican Republic. The main purpose of the mission trip was to help build a church for the congregation of Espíritu Santo in Las Carreras. The Rt. Rev. Julio Holguín, Bishop of the Diocese of the Dominican Republic, visited their work site one day and blessed each member of the mission team. 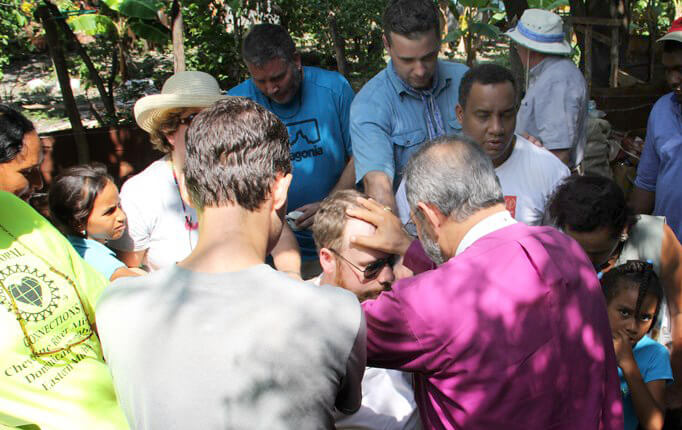 Bishop Holguín (purple shirt, back to camera) blesses the Rev. Lonnie Lacy while other team members and local residents gather around.

The team reported that although the construction work was important, the “greater work of building lasting relationships and friendships with our Dominican brothers and sisters ended up mattering so much more.”

An album of photographs from this trip is available here.

For more information on this mission trip, contact the Rev. Lonnie Lacy at St. Anne’s Tifton, or the Rev. Jay Weldon at St. Patrick’s Albany.