You may also be interested in our online archives: archives.georgiaepiscopal.org.

The history of the Episcopal Church in state of Georgia

begins at the same moment as that of the colony of Georgia. The first ordained minister of the Church of England to arrive here stepped  on shore with Georgia’s first colonists in 1733. We have sought to serve the people of Georgia ever since. Anglicanism in this country survived the challenge of the American Revolution to become the Protestant Episcopal Church. The Georgia Episcopal structure, very weak after the Revolutionary era, flickered and sputtered but emerged as a small Diocese of three parishes in 1823: Christ Church, Savannah; Christ Church, St. Simons Island (pictured here, at right); and St. Pauls, Augusta.

Seventeen years later there were six churches as Christ Church, Macon; Trinity Church, Columbus; and Grace Church, Clarkesville had been added to the earlier three churches. Christ Church, Savannah’s pledge of $400 to the ministry in Clarkesville made the ministry of Grace Church possible and secured the six parishes necessary to elect a Bishop. The six parishes met in Clarkesville in 1840 to unanimously nominate and unanimously elect the then 36-year old Stephen Elliott as the first Bishop of Georgia

In 1861, Bishop Elliott and Leonidas Polk, Bishop of Louisiana issued a letter calling for a break with the General Convention of The Episcopal Church, which they noted came not from doctrinal differences but “political changes.” The group that met in response to this letter formed the Protestant Episcopal Church of the Confederate States of America, with Bishop Elliott as its first and only Presiding Bishop. The Confederate church was reunited with the remainder of The Protestant Episcopal Church in the United States in 1865. Bishop Stephen Elliot died unexpectedly on December 21, 1866.

The following year, John W. Beckwith, then rector of Trinity Church, New Orleans. was elected as the second Bishop of the Diocese of Georgia. He was consecrated as Bishop on April 2, 1868 in St. John’s Church, Savannah. Beckwith served as Bishop of the Episcopal Diocese of Georgia for 23 years during the difficult period of reconstruction. There were 31 churches in the diocese at the time of his consecration. At his death, there were 53 churches and five missions. In 1887-1888, Bishop Beckwith spent five months abroad preaching in Anglican Churches in Italy, France, England, Egypt and Palestine. He died November 23, 1890.

Finding a successor for Bishop Beckwith proved difficult as the Diocese was twice turned down by those elected to the office. First the Rev. Thomas Gailor who served as the Vice-Chancellor of the University of the South turned down the job after his election in May 1891. Then the Rt. Rev. Ethelbert Talbot, Missionary Bishop of Wyoming and Idaho declined in July of that year. Both men cited their commitments to their present positions. Finally, on November 11, 1891 the Rev. Cleland Kinchloch Nelson, rector of Church of the Nativity in South Bethlehem, Pennsylvania, was elected. He accepted the position and was consecrated as the third Bishop of Georgia on February 24, 1892 at St. Luke’s Church, Atlanta.

In February 1908 the Diocese of Georgia met in convention in Augusta and elected The Rev. Frederick Focke Reese, rector of Christ Church, Nashville, Tennessee. as the fourth Bishop of Georgia. That spring, poor health caused the newly elected bishop to take an extended leave of absence, resuming ecclesiastical duties April 1, 1909. During his tenure as Bishop, the missionary work of the Diocese concerned the creation of new missions for blacks. By 1913, there were two predominantly black parishes in the Diocese, St. Athanasius Church, Brunswick and St. Stephen’s, Savannah, as well as thirteen predominantly black missions. Bishop Reese served until his retirement in 1934.

The election of a successor to Bishop Reese took two conventions to be decided. On August 30, 1934, a special convention was held at Grace Church, Waycross and failed in twelve ballots to elect a new bishop. A second session met January 15, 1935 at St. Paul’s, Augusta and took nine more ballots to elect the Rt. Rev. Middleton Stuart Barnwell, then Missionary Bishop of Idaho, to become the fifth Bishop of the Diocese of Georgia. At the time of his election, there were 16 parishes, 21 organized missions, 13 unorganized missions, five mission stations and one parochial mission. The still segregated church records noted 5,391 white and 1,029 black communicants. During his tenure as bishop, which lasted until 1954 the Diocese grew to 8,156 total communicants with two more churches becoming parishes and four additional missions created.

During the diocesan convention of 1954 seventeen persons were nominated to succeed Bishop Barnwell. Even with the large field of candidates, the Very Rev. Albert Rhett Stuart, Dean of Christ Church Cathedral, New Orleans, was elected on the second ballot and was consecrated as the sixth Bishop of the Diocese of Georgia in St. Paul’s Church, Augusta, on October 20, 1954. In 1957, a newly acquired Diocesan House on East Bay Street in Savannah was dedicated as the diocesan headquarters. At that time, there were 9,976 communicants in the Episcopal Diocese of Georgia.

The Rt. Rev. Paul Reeves was consecrated as the seventh Bishop of the Diocese of Georgia on September 30, 1969. He was succeeded by The Rt. Rev. Harry Woolston Shipps who was consecrated on January 6, 1984. During Bishop Shipps’ tenure as diocesan bishop, the Diocese made headlines when a former Assembly of God minister, Stan White, lead his independent congregation to join the Episcopal Church en masse and as Christ the King Church, Valdosta, became a congregation in the Episcopal Diocese of Georgia.

The ninth Bishop of the Diocese of Georgia, Henry I. Louttit, Jr., was rector of Christ Church, Valdosta at the time of his election. He was consecrated as bishop on January 21, 1995. Bishop Louttit had long been interested in liturgical renewal and was involved in the creation of the Book of Common Prayer 1979. Under Bishop Louttit’s leadership, the Episcopal Diocese of Georgia has taken renewed interest in starting new congregations. He authorized the formation of the missions of St. Stephen’s, Leesburg; Church of the Holy Comforter, Martinez; King of Peace, Kingsland; St. Luke’s, Rincon, and the Episcopal Church of Our Savior at Honey Creek. Bishop Louttit’s father, the Rt. Rev. Henry I. Louttit, Sr., was the last bishop of the Diocese of South Florida before it was divided into three new dioceses.

The tenth Bishop of Georgia was elected September 12, 2009 in Dublin, Georgia and consecrated on January 23, 2010 at the Savannah International Trade and Convention Center. The Rt. Rev. Scott Benhase was graduated from Virginia Theological Seminary. He served at parishes in Indiana, North Carolina, Ohio and Virginia before he was called to be rector of St. Alban’s, Washington, D.C. (Diocese of Washington) in 2006, where he was serving at the time of his election. During his tenure, the General Convention of The Episcopal Church approved rites for same sex marriages and these began to be used in the Diocese. Benhase’s major initiative was the Campaign for Congregational Development, a capital campaign raising funds to enhance capacity in congregational growth and development, clergy and lay leader development, and leadership formation of youth and young adults. In his final address to the diocesan convention in 2019, Benhase announced he was committing three percent of the diocesan endowment to begin a new center for racial reconciliation and healing.

The eleventh Bishop of Georgia was elected on the first ballot from a field of five candidates during an election that took place on November 16, 2019, in the Lane-Nessmith Center at Georgia Southern University, Statesboro. The Rt. Rev. Frank S. Logue had served the previous decade as an assistant to Bishop Benhase (Canon to the Ordinary). Prior to that call, he planted King of Peace Episcopal Church in Kingsland, Georgia. A graduate of the Virginia Theological Seminary, Logue worked as a newspaper photographer and co-authored seven books with his wife, Victoria, prior to answering a long-felt call to ordained ministry. He was ordained and consecrated Bishop of Georgia on May 30, 2020, at Christ Church, Savannah. Because of a sheltering in place order due to the COVID-19 pandemic, Bishop Logue’s consecration had 11 people in attendance in the church with a livestream offered online for the Diocese and the Episcopal Church.

Today the Diocese of Georgia now covers the southeastern 32,994 square miles (85,450 km2) of the State of Georgia, running from the Chattahoochee River west of Americus to the Savannah River north of Augusta. Savannah is the see city. In February 2020, the Diocese of Georgia reported 14,157 communicants with an average Sunday attendance of 5,600 in its 70 churches. 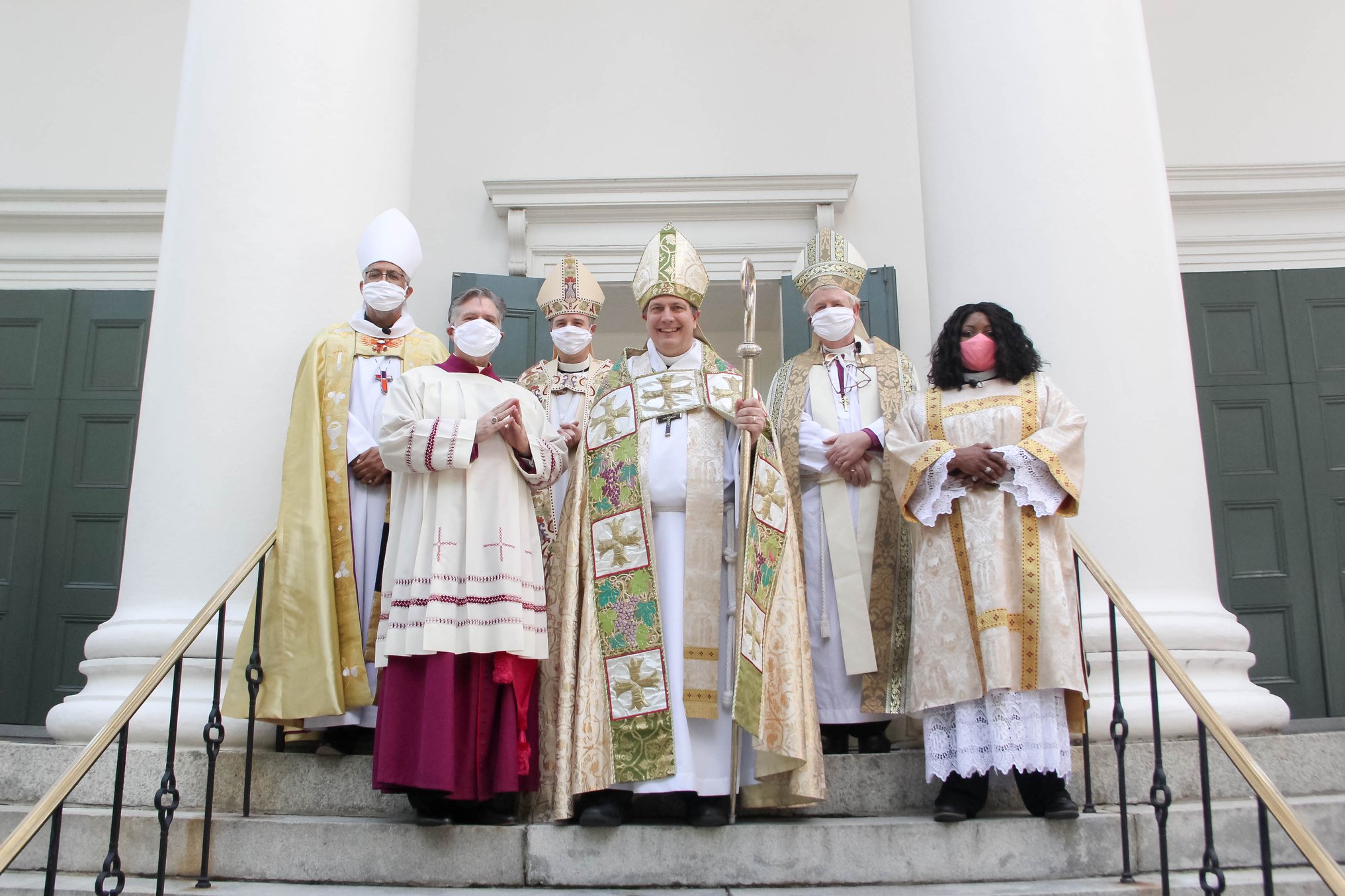 Bishop Frank Logue with the altar party after his May 30, 2020, ordination as Bishop of Georgia 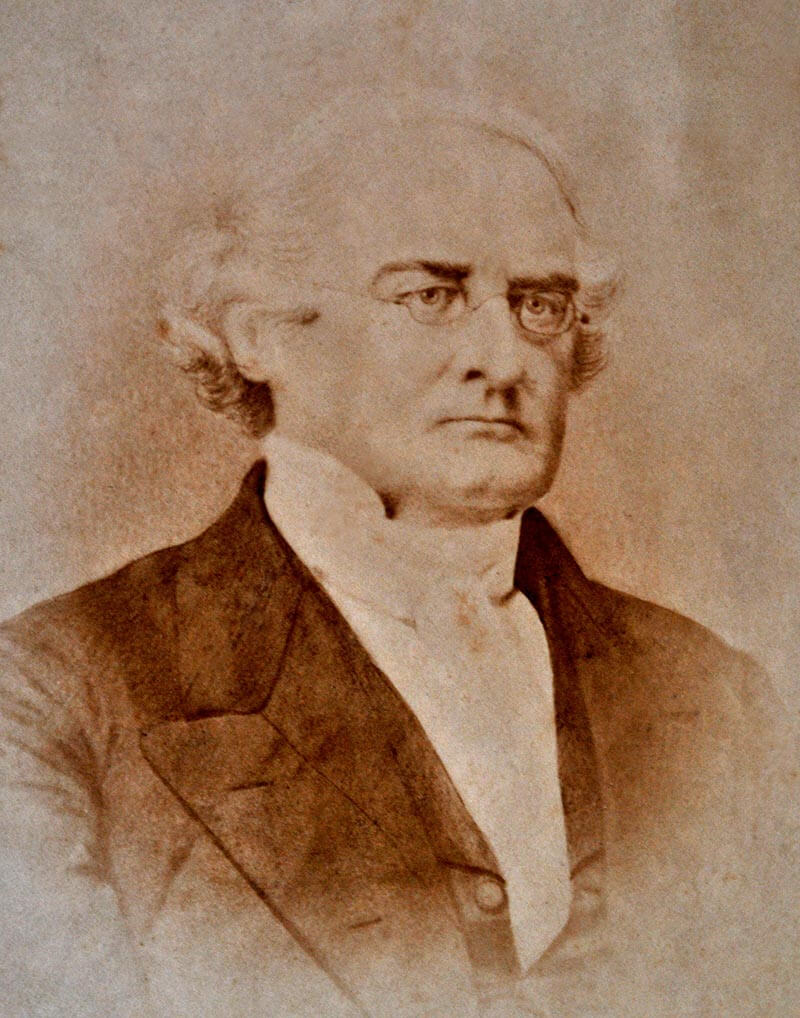 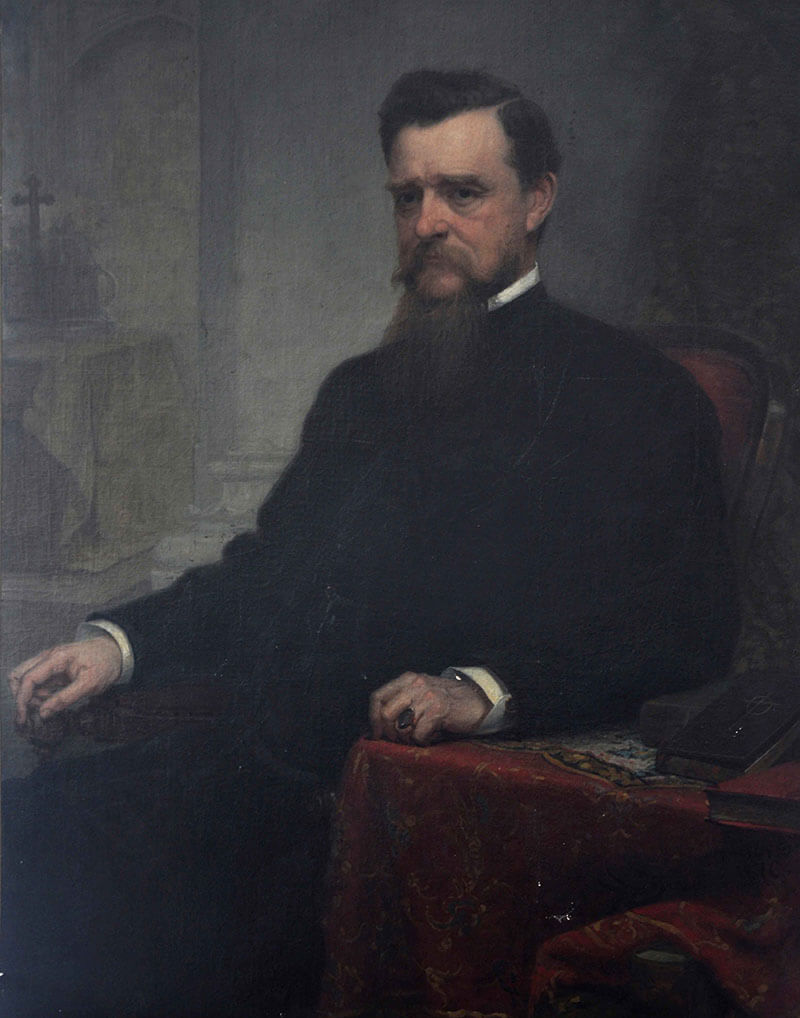 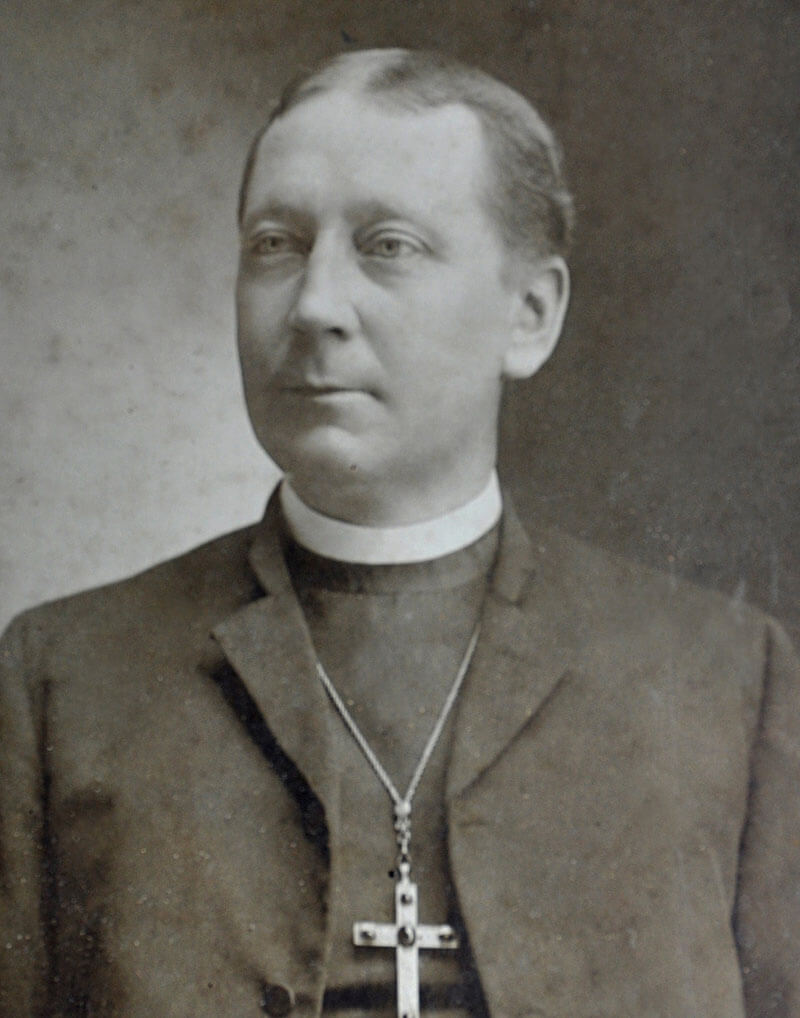 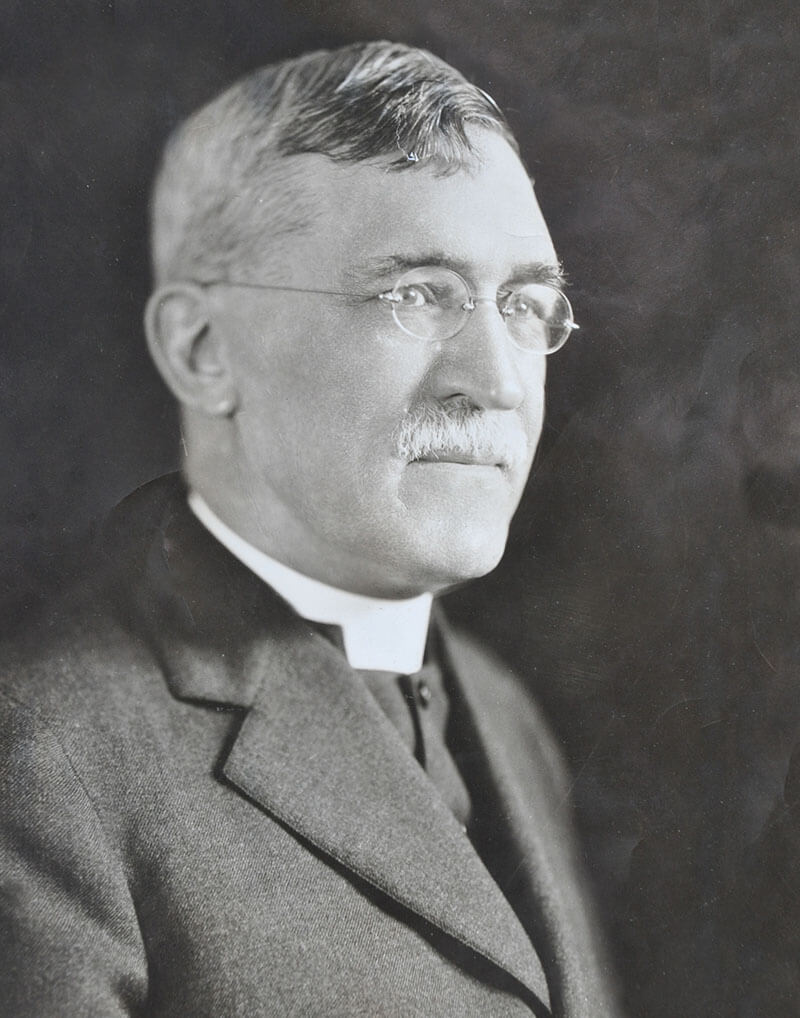 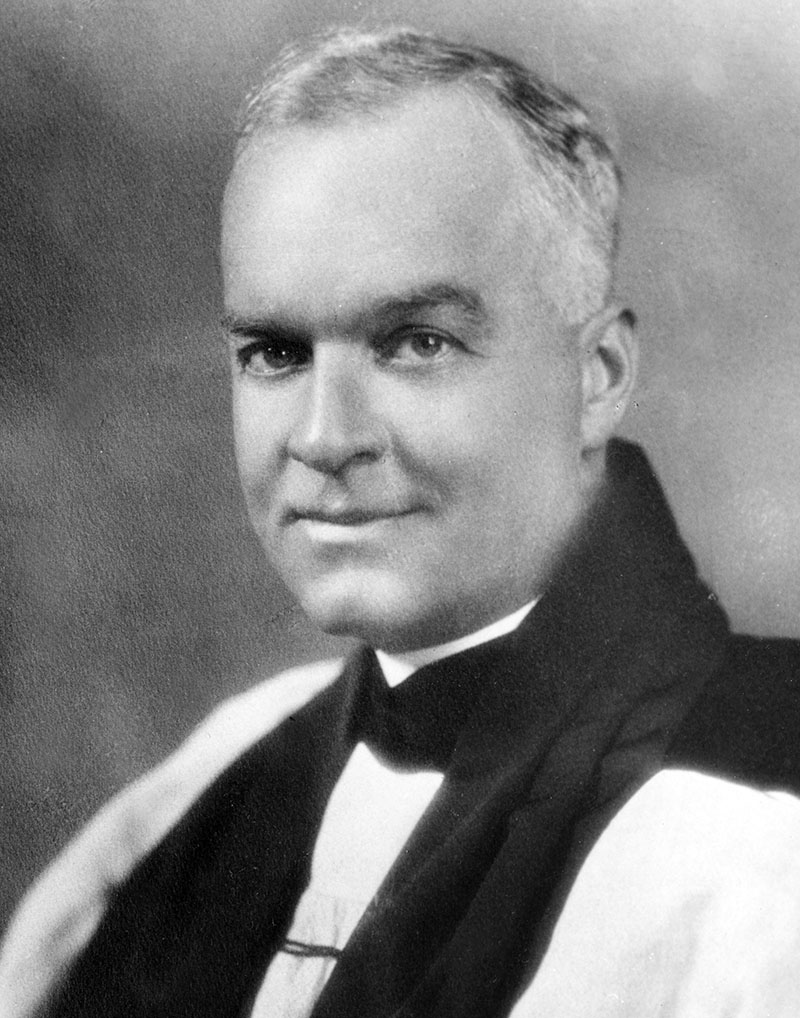 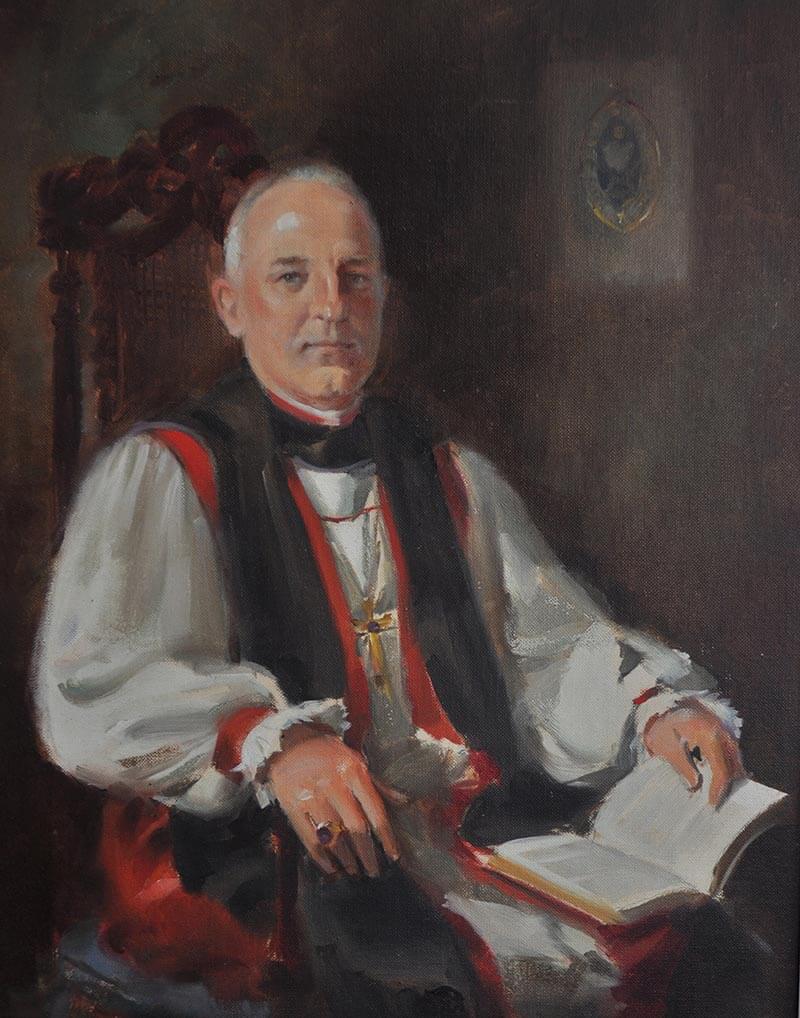