Good News in the Middle of the Night

A Christmas message from the Episcopal Diocese of Georgia
by the Rt. Rev. Frank S. Logue
December 25, 2021

In the middle of the night, fears rise and worries rule. Staring at the clock at three in the morning only to bargain with an anxious brain about how much sleep you can get if you fall back to sleep (right now!) only feeds the insomnia.

The search giant Google’s trend data on more than 3.5 billion searches every day worldwide offers illuminating insight into the concerns that disquiet our minds in the midnight hours. For example, “soulmate” was searched for globally more in 2021 than in any previous year. How to “maintain mental health” was searched for in much bigger numbers, which is not surprising as we were also Googling “What day is it?”

This window on the concerns that span the globe is most remarkable. In Malaysia, top searches this year show a longing for a return to normalcy amidst burnout and exhaustion. The search for affirmation by people needing to hear that they are worthy and loved has risen sharply, and is highest in Kazakhstan. Searches seeking body positivity have been more ubiquitous in 2021 than ever before. Some patterns abide, such as searches for the meaning of life which for years have risen on Sunday into Monday, as the work week looms, with a spike at 4 am. 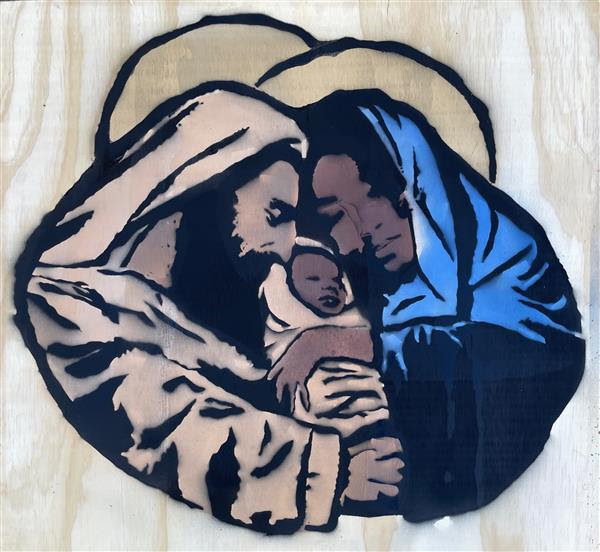 Christmas is the story of human hopes and fears met in the night by the maker of heaven and earth coming to live as one of us. We invariably tell of Jesus’ birth as a night story. It need not be so as the Gospel writer Luke said of Joseph and Mary’s stay in Bethlehem for the census, “While they were there, the time came for her to deliver her child.” Meanwhile Matthew writes of Joseph having a dream and waking to resolve to wed Mary and that after she bore a son, he named him Jesus. At right is Bishop Logue’s graffiti-style image of The Holy Family, which he painted last weekend on plywood, using spray paint and a hand-cut stencil he designed.

The birth itself need not have come in the night. I think there is an instinct that the longings of our sleepless nights are answered by a loving creator who does not stand back as righteous judge but enters into creation to reweave from within the tattered tapestry of a world turned from God. As Zechariah proclaims after the birth of his son, who we will know as John the Baptist, “In the tender compassion of our God the dawn from on high shall break upon us, to shine on those who dwell in darkness and the shadow of death, and to guide our feet into the way of peace.”

Through the Holy Trinity that existed before time, not staying apart, but entering creation, dawn breaks for those who feel trapped in the night. This fits with Luke, who did add the detail that the shepherds were keeping their flocks by night. Angels appeared to them, sending them searching Bethlehem for a baby wrapped in swaddling clothes, lying in a manger, a feed box for livestock. I always see in the angels outside Bethlehem as God being revealed as a sentimental softy. For God loved the famously fallible King David, who tended sheep as a boy on these very same hills. Jesus is born in the City of David with the messengers of God are sent to shepherds.

I see it this way because the choice of revealing God’s plan to a group of shepherds made no sense in human terms. Shepherds were, along with tax collectors and some other occupations, regarded by the law of the time as little better than thieves. As they tended flocks well away from the owners of the herd, who could know how many lambs were born in a given year? It was not uncommon for shepherds to sell off some lambs and pocket the money. Shepherds were not permitted to appear in court as a witness as they were considered so unreliable. It was pure foolishness to give the greatest news of all to a group that the very people no one would believe.

The Apostle Paul would later write to the church in Corinth, “But God chose what is foolish in the world to shame the wise; God chose what is weak in the world to shame the strong; God chose what is low and despised in the world, things that are not, to reduce to nothing things that are, so that no one might boast in the presence of God” (1 Corinthians 1:27-29). God decided that becoming human meant siding with the oppressed and the outcasts and showed it by coming first to poor, lowly, and even despised people. That’s not how anyone thought a god would act. Yet God the Holy Trinity broke all the rules to fulfill a love story that was centuries in the making.

I need you to know that this is not stained glass talk from a church leader, but the reflections of a son who has spent sleepless nights this fall into winter. My Mom’s physician diagnosed her with dementia this summer. She has seen two of her seven siblings face diminishing cognitive capacity. She cared for a sister dealing with daily sundowning issues, when her sister could not recall where and when she was. I have watched how my mom bravely faces this situation she knows all too well.

I have worked with my siblings to assist our mother in keeping the life she wants as long as we can and I find myself waking in the night, worrying over the imperfect decisions and questioning the path we are on. I wonder about Google search trends as I have been among them as my own fears rise and worries try to rule my nights. I do not say this to seek sympathy as so many of us face problems we confront all day as faithfully as we can, only to find insecurities rising in the wee hours. I offer instead the empathy of a fellow worrier in the night.

What I see so clearly, even in the anxious hours, is that Christmas reveals that we are not the only ones searching in the night. In angels coming unbidden to the shepherds we see God’s longing to bring joy. Decades later, the Jewish leader Nicodemus will come to Jesus at night seeking answers. Jesus will tell him that light has come into the world and that “God did not send the Son into the world to condemn the world, but in order that the world might be saved through him.”

The great saint and teacher of the church, Augustine of Hippo wrote in his Confessions, “You have made us for yourself, and our heart is restless until it rests in you.” God is the seeker who sought to save us. God is the one who is restless, literally up with us in the night, until in a kingdom yet to come, we all find our rest in God.

As the nights grow longer, as uncertainties linger, and 2021 draws to a close, we find humans still facing their fears, looking for affirmation and for meaning and purpose all around the globe. And the joyful news of Jesus’ birth is that God did not stand back as a judge seeking to condemn. God seeks us. God entered the cosmos to offer love as a vulnerable child.

We also see that as Magi—wise ones from the East—sought a sign in the night sky, they were given one. The Magi were seekers. Their methods were unorthodox from the Jewish perspective. Yet, God called out to the Magi from the heavens leading them to Jesus. God, not the Magi, initiated their quest for a destination unknown. God guided them. The Magi played their part, of course. They did not simply stay home admiring the star in the sky. Yet all of their actions came second. It was God who was the seeker. God initiated their journey. The new star shone so brightly that they were drawn to its dawning. In this we see how our longings in the night are met by the God who made us out of love for love and still longs to connect with us in the midst of sleepless nights.

The Good News of Christmas is that this same God came and lived among us in Jesus and so knows what it is to be human. God is with my Mom as sundowning brings confusion and with me and my siblings as we wonder in the night whether we are getting it right. God is with you in the  anxieties you face even as God is with those seeking affirmation in Kazakhstan and a return to normalcy in Malaysia. Whether you are wondering what day it is or finding ways to maintain your mental health, the creator of the cosmos sees you as a beloved child, knows you by name, and is with you always.